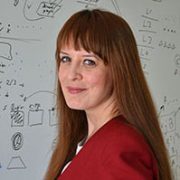 Elif Sürer received her Ph.D in Bioengineering in 2011 from the University of Bologna. She received her M.S. and B.S. degrees in Computer Engineering from Boğaziçi University in 2007 and 2005, respectively. From 2013 to 2015 she worked as a post-doctoral researcher in University of Milan in the EU Project REWIRE (funded by the Seventh Framework Programme) where she developed video games for the rehabilitation of stroke and Neglect patients. She joined METU Graduate School of Informatics’s Modelling and Simulation Department in 2015 and worked on the training of children having Down Syndrome using video games, which is fully supported by The Scientific and Technological Research Council of Turkey (TÜBİTAK) under TÜBİTAK 2232 – Reintegration Research Fellowship Program. She is currently working as an Assistant Professor at the METU Graduate School of Informatics’ Multimedia Informatics program. Her research areas are serious games, virtual/augmented reality, human and canine movement analysis, machine learning and computer vision.

Want to join the discussion?
Feel free to contribute!